The sculpture at the corner of Armistead Avenue and Scotland Street (below), is a classic image, snatched out of time, of three books held together and hanging from an old belt – a time when children would have done this to carry books to and from the library. Artist Willy Ferguson crafted the entire piece out of hot rolled steel, with the exception of the stainless steel belt buckle. 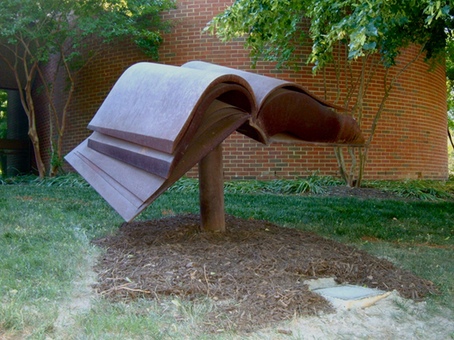 Around the corner (below) is a second book sculpture by Willy Ferguson. Offering the viewer another moment in time, this open book offers a glimpse at an unidentified page, as though its invisible reader is settling down to read a favorite passage or start a new chapter. The piece is made from hot rolled steel. Both sculptures were created in Staunton, Virginia. 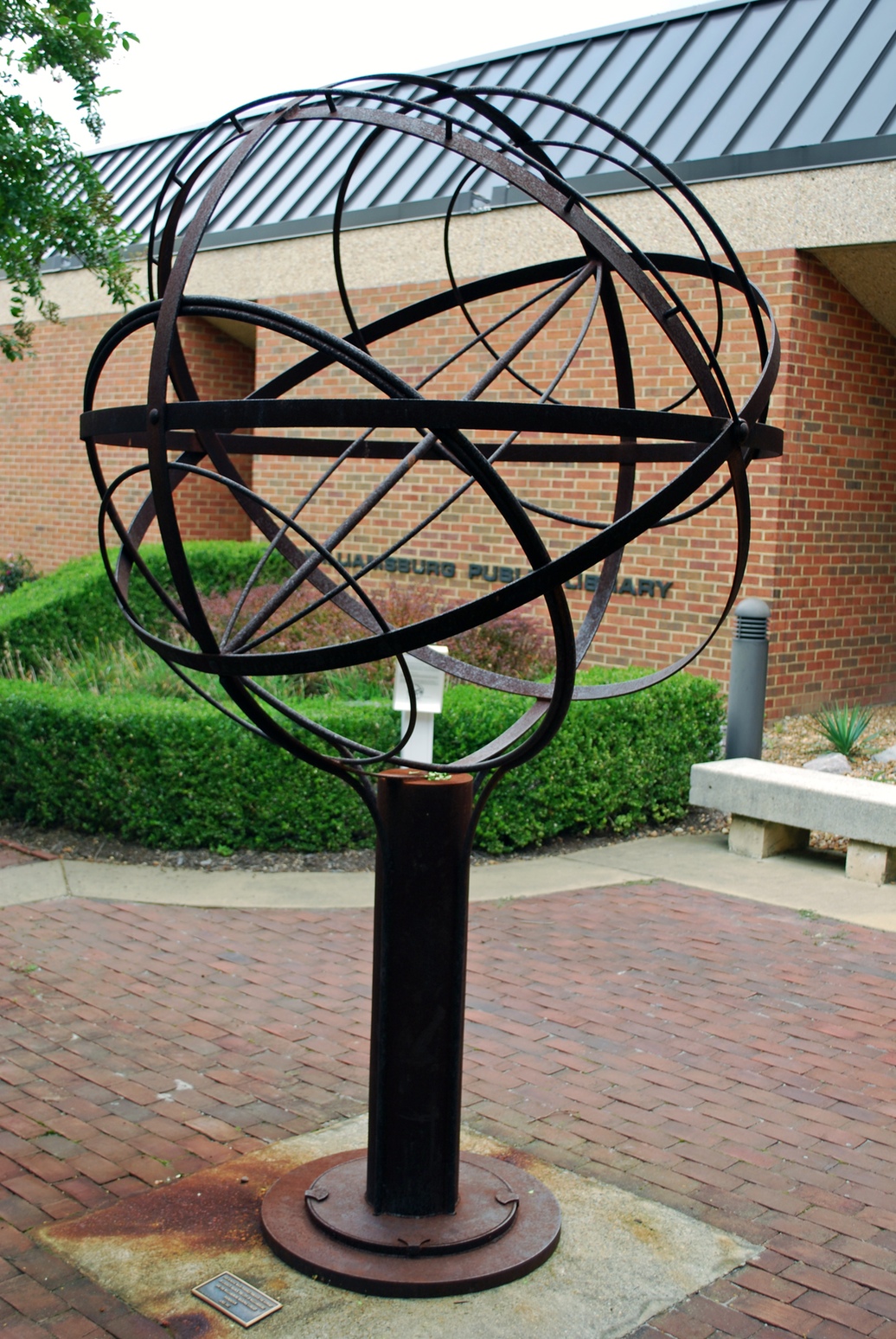 The armillary (which means hoops) sundial at the Williamsburg Library was crafted in 2002 by Willy Ferguson, Ferguson Metal Fabrication in Staunton, Va. It resembles a miniature Earth made from bands of welded carbon steel. This sundial’s gnomon (shadow arm) is the rod that bisects the sphere. The gnomon represents the earth’s axis and the other bands include representation of the equator and celestial horizon.

The sculptor of the three Williamsburg pieces, Willy Ferguson, was born in 1949, to a Sicilian mother and staunch Scot father. A native of Edinburgh, Scotland, the family moved to the United States when he was four. As a young man, Mr. Ferguson felt a desire to create. He found his outlet in metal sculpture. His work has been included in Time-Life publications and received numerous awards.

How to Tell Time with this Sundial

The Hanging Books and sundial sculptures at the Williamsburg Library  were funded through private support from Louisa France and commissioned by the Williamsburg Regional Library Foundation.  The Open Book scultpure was donated by Willy and Gail Ferguson.

The James City County Library Hidden In The Pages

Dedicated September 23, 2009 to commemorate the 100th anniversary of the founding of Williamsburg Regional Library, this work was created by York County, Va.-artist Ms. Cyd Chambers Player. The 3,000 pound, 26 foot-long outdoor sculpture is located in front of the James City County Library, 7770 Croaker Road in Norge.

Cyd Player is also the artist who produced the life-sized statues of General George Washington and the Admiral Comte De Grasse that have been on the Yorktown waterfront since 2005.